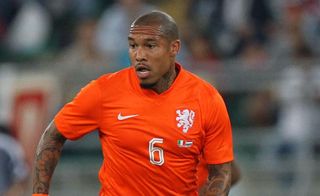 Nigel de Jong has stressed that he remains available for Netherlands and has set his sights on representing his country at the 2018 World Cup in Russia.

The combative midfielder has not worn the Oranje jersey since the 1-1 draw with Turkey in March 2015, but has made it clear he still dreams of adding to his 81 caps.

"Of course, Netherlands should have been there at Euro 2016. I have not missed a major tournament in ages," De Jong told Metro.

"Oranje must qualify for the 2018 World Cup now. I definitely want to be there.

"I never said I retired from Oranje duty. I am still only 31. I have a few more years in me."

Netherlands coach Danny Blind previously suggested De Jong would have to return to Europe in order to have a chance of making his international comeback, but the 31-year-old has no intention of leaving LA Galaxy.

"I am staying here in LA, also after I hang up my boots. Life is fantastic here," he added.

"I already knew LA and wanted to start a new life here. It is exactly what I hoped it would be. I am loving life here.

"Of course, Europe breathes football and I sort of miss that. Players have a different mentality as well, but things are improving."