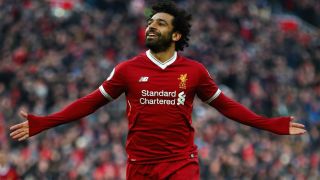 Mohamed Salah was viewed as a risky bit of transfer business by some when Liverpool signed him from Roma.

However, having failed to impress during his time as a blue at Chelsea, the forward was a revelation in red.

Salah scored 44 goals in 52 appearances in his debut campaign, winning the Premier League's Golden Boot in the process, to become a focal point for Jurgen Klopp's attack-minded side and a new hero for the Anfield faithful.

The player dubbed the Egyptian king by the famous Kop is set for an extended reign on Merseyside too, with the club announcing the 26-year-old has signed a long-term contract that, according to media reports, does not contain a release clause.

To mark his new deal, we've picked out some of the most momentous moments during Salah's sensational first season at Liverpool.

It can take new forwards a while to find their feet at a club, yet Salah needed just 57 minutes to get off the mark on his competitive debut for Liverpool.

Having already won the penalty that drew his side level at 2-2 in the second half of their Premier League opener against Watford at Vicarage Road, the 26-year-old fired the visitors ahead to break his duck. However, Jurgen Klopp's side let victory slip from their grasp - Miguel Britos scoring a dramatic equaliser in added time to see the game finish 3-3.

Salah had to wait for his first taste of the Merseyside derby, with Everton making the short trip to Anfield in December for the first of three games between the neighbours during the 2017-18 campaign.

The Egyptian marked the occasion with a sublime finish to break the deadlock in the 1-1 league draw, shrugging off the attentions of a defender when he had his back to goal on Liverpool's right before cutting inside to curl gloriously beyond Jordan Pickford's reach with his left foot.

Manchester City's irrepressible march to the title could not be stopped by their rivals, but Liverpool put paid to the possibility of the champions-elect going unbeaten throughout the campaign by coming out on top in a seven-goal thriller.

Klopp's side blew the game wide open with three goals in the space of nine minutes after the interval, Salah adding the last of them when he seized on a weak clearance from Ederson to curl the ball up and over the stranded City goalkeeper. The clinical finish put his side 4-1 up and while they had to weather a late storm, the hosts held on to hand City a first league loss.

Liverpool and Tottenham played out an absorbing 2-2 draw at Anfield, with Salah scoring both the home team's goals in a dramatic clash between two top-four contenders.

The pick of Salah's pair came late in the game, as he turned away from Ben Davies, dummied his way beyond Jan Vertonghen and then lifted the ball over the advancing Hugo Lloris. It appeared the moment of individual brilliance would earn all three points, only for Harry Kane - who had earlier missed from the spot - to draw Spurs level with a penalty in the fifth minute of additional time.

Poor Watford. Having already scored against the Hornets on his Premier League bow, Salah stung them for four more in a 5-0 victory in the reverse fixture. Oh, and he also set up Roberto Firmino's other goal in the rout.

Astonishingly, the forward found the net with his only four attempts at goal, becoming just the second player to achieve the feat in the Premier League since 2003-04. It was also the first time he picked up a match ball in his Liverpool career.

Jürgen Klopp believes 's decision to a sign a new long-term contract is an indication of the direction in which are heading: July 2, 2018

The semi-final draw for the Champions League threw up a meeting between Salah's new club and his old employers. Roma should have known all about the player's strengths, having sold him to Liverpool the previous year, yet they were still unable to stop him playing a starring role in a 5-2 home win.

The old boy marked the chance to face his ex-team-mates with a brace, with his second a delightful clipped finish over Alisson when through one-on-one as the goalkeeper rushed out. He did not celebrate either of his goals out of respect for Roma, yet his double helped give Liverpool a first-leg advantage they just about maintained in the return fixture on Italian soil.

Salah scored the opener on the final day of the Premier League season against Brighton and Hove Albion, setting his side on their way to a 4-0 triumph that secured fourth place in the table and guaranteed Champions League football in 2018-19.

It was also a momentous moment for Salah on a personal level too, as he became the first player to hit 32 goals in a 38-game campaign in the history of the competition. Substituted in the closing minutes of the game, he returned to the pitch after the final whistle to collect the Golden Boot, presented to him by club legend Kenny Dalglish.