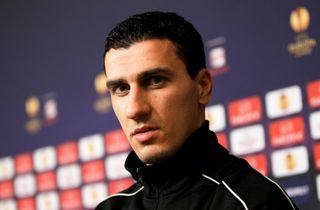 The Belgium international was originally due to move to Greece at the end of the campaign when his contract with AZ expires.

However, the clubs agreed a fee for the 29-year-old this week after protracted negotiations over a transfer fee, with the deal confirmed on Wednesday.

After spending almost eight years at the club, Martens thanked AZ supporters for their backing following his switch to the Greek Super League outfit.

"It is not often that a player stays at a club seven-and-a-half years," he stated on the club's official website.

"In those seven-and-a-half years that I was in AZ, I, like you, experienced just about everything. We can rejoice in the greatest successes, the league title in 2009, the Johan Cruyff Shield of that year and the KNVB Beker in 2013.

"I want to thank everyone for the tremendous appreciation I have always felt. I definitely will return to AZ in the future."