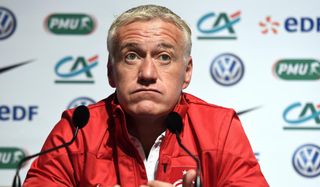 Ronaldo has been in scintillating form for Real Madrid, scoring 15 goals in eight games in all competitions for the European champions.

The FIFA Ballon d'Or winner also equalled the all-time record for the most La Liga hat-tricks after his three-goal haul against Athletic Bilbao on Sunday.

And Deschamps knows the Euro 2016 hosts must curb the influence of Ronaldo at the Stade de France.

"It's complicated [trying to stop Ronaldo], difficult, because he is a player that has a very high efficiency," Deschamps told reporters.

"Even if that is more on display at his club, he is also effective with his national team. The fans who will come to the stadium will be happy to see him.

"But I don't know if he will play or how long for because they have an important game three days after this friendly.

"There will be a lot of special attention on him because in a head-to-head, in a one-on-one, he is someone who manages to make a difference.

"It will be important to limit his influence on his team. But then inevitably it leaves more freedom to the other players."

But despite aiming to "limit" Ronaldo, the 1998 World Cup winner believes his Real Madrid team-mate, Karim Benzema, is the right man to lead France's front line, having been backed by the Portuguese himself.

"Although we tend to question the qualities of Karim [Benzema], especially here in France, Karim is a player of the highest level," added Deschamps.

"As a striker, he has periods where he scores a little less than others, at Real as well, even if he plays a very important role in the game. He makes a lot of assists as well.

"With the quality he has, it's no coincidence that he is the Real Madrid's main striker and he still plays the matches.

"Sometimes, he has the right to blow but it's still a very important player for Real Madrid. And if Cristiano says so ... there is no better lawyer than Cristiano Ronaldo. And with us, of course, too."