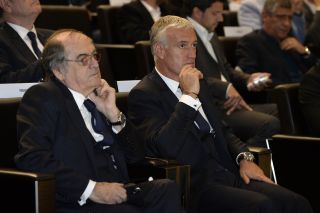 Having missed out on being seeded for Monday's draw in Zurich, Deschamps' men avoided a potentially daunting meeting with Portugal and will be considered favourites in many quarters to overcome a Ukraine side ranked one place above them in the world rankings.

France also have the advantage of playing the second leg on home soil.

Yet Deschamps said: "It won't be easy. They're a team who have gone seven matches unbeaten and who concede very few goals. It'll also be a long trip for us.

"But it's a good thing to be at home in the second leg. We have to have confidence in ourselves but we should also have respect for our opponents, who will be giving their all to take their chance."

Sweden coach Erik Hamren is optimistic his side have what it takes to knock out Portugal, the highest-ranked team in the play-offs.

Cristiano Ronaldo is likely to pose the major threat for a country who failed to better Russia in Group F.

Asked for his thoughts on Portugal, Hamren said: "Very good on their day but we saw during qualifying that they have not so good days as well.

"It's a tough challenge but then any team would have been. I am optimistic."

"We are aware of the difficulties, but confident that we're going to be in the World (Cup)," said Bento.

"Sweden has been at large events and we'll have to compete in the best way."

In contrast to Portugal, Iceland were the lowest ranked side in Monday's draw.

However, coach Lars Lagerback feels his unfancied team can build on strong performances in Group E when they take on Croatia, who have Niko Kovac in temporary charge following the resignation of Igor Stimac.

"It is an interesting team to play and I am looking forward to the game," said Lagerback.

"We are the underdogs on paper, of course, but I think we surprised some teams during the qualification so far and we hope to do that again.

"Everything will depend on the first game and hopefully not conceding goals at home."

The other play-off tie sees Greece take on Romania.

Greece boss Fernando Santos expects a "very open" encounter and added: "I think it will be a very difficult round for both, but I believe that Greece can move on."