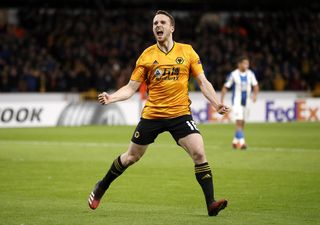 Wolves winger Diogo Jota is happy to stay in England during the coronavirus lockdown – to avoid the temptation of visiting his family.

The Portugal international admits it is difficult being so far away from his family during the global pandemic but his club have ensured he is looked after – even doing his shopping for him.

The 23-year-old joined Wolves from Atletico Madrid three years ago, initially on loan, and is settled in the West Midlands.

When asked if it was difficult being away from his family, Jota told Portuguese newspaper Record: “Yes, a bit. But I knew that if I was in Portugal it might be even more difficult to manage, as I was closer to them and the temptation to have social contacts was greater.

“Being here, that is harder to happen and as much as it costs us, this is what we must do.

“I obviously hope that my family does not receive bad news. And I try to pass on to them all the messages that I get from the club. To avoid leaving home, unless it is extremely necessary.

“The goal is for all of us to be together again once this situation ends.

“The club has helped us in everything. In fact, it has been essential.

“Whoever stayed here, the club managed to find a basket with all kinds of food, so we don’t have to go shopping. And in the medical area, we were given a kit with everything we need. I’m talking about masks, hand sanitiser and everything.

“The club does everything in their power so that we don’t miss anything.

“And the coaching staff drew up a plan for this first stage, which is said to last until the end of April, but from the looks of it, it will last beyond that.

“We have an individual work plan, with the idea of being as close to our best shape as possible. Basically, we have everything we need.”

Jota also has his love of esports and gaming to keep him engaged in football. He recently won a Wolves players’ FIFA 20 tournament and beat Aston Villa rival Ezri Konsa in a charity game on Saturday.

The former Porto player said: “I happen to be training Telford United on Football Manager, which is a team here in the area.

“I’m quite addicted, but in a good way. I really like to play and use a good part of my free time involved in football, even though through esports. After all, football is my greatest passion.

“For example, if we travel to London by train, I spend at least two hours with my laptop playing Football Manager. Then, in hotels, I have PlayStation, where I play mainly FIFA but sometimes even other types of games.”