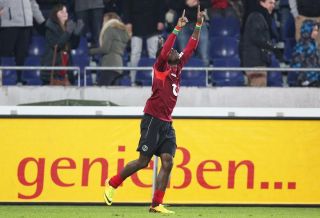 The Senegal international has been linked with a move away from the HDI-Arena, with Premier League outfits Cardiff City and Stoke City touted as potential destinations.

But while the player's agent Jim Solbakken confirmed there is interest from clubs in his client, he insisted Diouf will stay in the Bundesliga until at least the end of the season.

"There are four clubs Mame would play for but nobody wants to pay the money Hannover asks."

Former Molde manager Ole Gunnar Solksjaer, now at Cardiff, has been heavily linked with an interest in Diouf recently, with the striker having scored five goals in the Bundesliga this season.