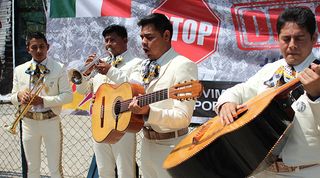 Grimsby fans took inflatables to the same away fixture two years ago, in protest at the treatment of one of their fans during a match against Forest Green Rovers.

An individual was ejected from the stadium after he refused to hand over an inflatable football.

It kicked off again at the Barnet game two years ago, where one Grimsby fan was found guilty of "assaulting" a steward with an inflatable shark. "I'm a bit deflated to be honest," said the witty joker when responding to his charge – a £100 fine and 12-month conditional discharge.

The two teams are due to face each other again this Saturday, and Barnet have banned the visitors from bringing any inflatables to The Hive.

But in order to keep the mood light, a group of Grimsby fans have come together to try to crowdfund a Mariachi band to play at the League Two fixture. At the time of writing, they've raised over half of their £1,000 target.

Any remaining proceeds will go to Grimsby's disabled supporters' club.

Who knew they were so expensive?