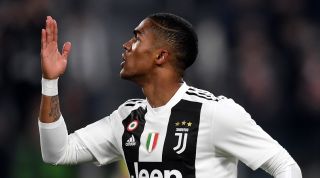 Manchester United want to sign Douglas Costa this summer, but Manchester City and PSG are also keeping tabs on the Juventus winger.

Tuttosport report that the Brazil international has emerged as a transfer target for Ole Gunnar Solskjaer, who was unveiled as United’s permanent manager on Thursday.

The former Bayern Munich man has been restricted to just seven Serie A starts this season and Juventus are willing to listen to offers for him at the end of the season.

It would cost United around £50m to bring Costa to Old Trafford, but PSG are in pole position to secure his signature.

The Ligue 1 side have been in talks with the forward’s representatives in the last few weeks and are on the verge of making an official offer for his services.

United and Manchester City remain in the mix, though, with Solskjaer and Pep Guardiola both keen to add to their attacking options ahead of next term.

The Red Devils take on Watford on Saturday as the Premier League returns after the international break, while City continue their title charge at Fulham.