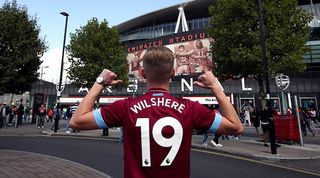 Perhaps, in Elyounoussi’s defence, the circumstances make him seem a worse signing than he actually is. The Norwegian winger’s return of no goals and no assists would always be disappointing and, should Southampton be relegated, his barren year would rank as a reason.

But the most damning part is that he came in to replace Dusan Tadic, who has scored 29 goals for Ajax and ejected Real Madrid from the Champions League with an astonishing display at the Bernabeu.

Players of Wilshere’s calibre, Manuel Pellegrini said in December, could have cost West Ham £100 million. But a free transfer still feels like money wasted, especially on a lucrative three-year contract.

If Wilshere’s injuries have been both sad and predictable, perhaps the greater problem was what happened when he was fit. West Ham lost all four games he started, and he and Mark Noble looked incompatible as a duo. Declan Rice came into the team when Wilshere dropped out, camouflaging how bad a signing he was and engineering a recovery.

It should be said that Fred was terrific when Manchester United won in Paris, and perhaps that night will transform his Old Trafford career. It needs to: only Paul Pogba, Romelu Lukaku and Angel Di Maria have ever cost United more.

But the Brazilian was behind Scott McTominay and Andreas Pereira in the queue for places. Two different managers, Mourinho and Ole Gunnar Solskjaer, had overlooked him – and in a damning appraisal, the Portuguese claimed United weren't strong enough defensively to play him. Perhaps, at least, there’s some hope.

With the honourable exception of Calum Chambers, virtually all of Fulham’s defensive signings could be on this list. Individually and collectively, they have been disastrous.

If singling one out is harsh, the numbers illustrate how damaging Le Marchand’s effect has been, either at left-back or centre-back. First off, the Frenchman played in the embarrassing FA Cup defeat to League Two Oldham. Fulham concede 1.84 league goals per game when Le Marchand doesn’t start; and if that’s bad enough, they let in an average of 2.55 when he does.

Huddersfield’s non-scoring strikers have attracted plenty of attention, but that rather obscures the failure of their wingers and attacking recruitment last summer which led to the arrivals of Isaac Mbenza, Ramadan Sobhi and Monaco’s Diakhaby.

None have mustered a goal. Diakhaby hasn’t even managed an assist in his injury-hit spell either, and it’s a sign of his negligible impact that Huddersfield have only taken two points from the 11 games he’s featured in.

Hart has conceded more Premier League goals this season than Mat Ryan and Martin Dubravka. Which wouldn’t be worrying in itself, but for one fact: he hasn’t played in 2019.

He conceded 41 in 19 games, of which Burnley won three and took just 12 points. If his signing was a surprise – Sean Dyche already had two England goalkeepers, plus two more net-minders in reserve – it felt all the more unnecessary when Tom Heaton returned, looked like an immediate improvement and Burnley’s form took an upturn as a result.

Kepa can’t be blamed for his world-record fee; that just isn’t his fault. Yet it may be his fault Chelsea didn’t win the Carabao Cup, with his display of insubordination denying penalty specialist Willy Caballero the chance to come on for the shootout.

And young as the Spaniard is, he looks a downgrade on Thibaut Courtois. When Chelsea concede, it’s often tempting to wonder if the Belgian would have saved those shots.

The symbol of a £100 million spending spree gone horribly wrong – Fulham will set a record for a relegated club’s expenditure. Anguissa is their most expensive purchase, a defensive midfielder who has often been left out so defender Chambers can play in midfield.

While Seri at least had the pedigree and admirers to explain his fee, it’s hard to say what Fulham saw in Anguissa. They’ve not even taken a point in a game when he’s played since September 1. Disaster.

QUIZ! Can you name the 28 players with 100+ Premier League goals?