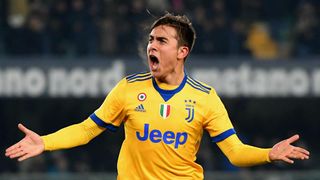 Massimiliano Allegri might not have selected Paulo Dybala in his starting XI over recent weeks but he believes the Juventus forward can be the leading star in world football along with Neymar when Lionel Messi and Cristiano Ronaldo leave the stage.

Dybala was named from kick-off for the first time in four Serie A matches against Verona on Saturday and proved to be his side's matchwinner after a late brace – including a stunning solo goal to seal the points – gave the champions a 3-1 victory to close out 2017 a point behind leaders Napoli.

The 24-year-old international has struggled for his best form over the past couple of months and had his commitment questioned by Juventus vice-president Pavel Nedved.

Before the Verona match, Allegri claimed comparisons to the greats of the game had been "damaging" for Dybala, but the head coach found himself doing just that in the aftermath of a brilliant individual display at the Stadio Marc'Antonio Bentegodi.

"It was important for him to score again and after that first goal, he seemed much more relaxed," Allegri told Premium Sport.

"When Messi and Ronaldo get older, it will be Neymar and Dybala who will be the best players in the world.

"He has a whole lot of football ahead of him and I know that he can keep improving."

The former AC Milan boss was not so glowing when it came to a collective performance, where Juventus spurned chances to build upon Blaise Matuidi's early opener and were pegged back by old boy Martin Caceres' excellent long-ranger before the hour.

"We are happy even if we know that we did not play a great game," he said.

"We risked a little and we made a lot of mistakes which led to their goal. Verona played a good game and they are doing well of late so we knew we were going to have to play well.

"Napoli are at 48 points so we knew that we needed all three points."

Allegri added: "There is still a lot of football to be played so we have to keep doing well. Five of our next seven games will be on the road so we will have to be very good indeed.

"Napoli have been incredible in 2017 and they play a great style of football. We are also there and we are waiting for them to slip up."