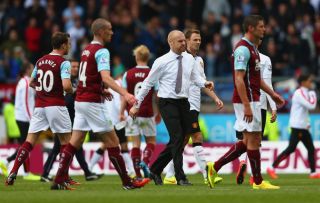 In the build-up to Saturday's clash at Turf Moor, United manager Louis van Gaal suggested his side would need to cope with a number of long balls from their opponents.

However, Burnley were able to vary their approach play to good effect as they secured a first Premier League point of the season.

The hosts were particularly impressive in the first half, with David Jones striking the crossbar early on, and Dyche expressed satisfaction at their performance.

"People have a way of looking at teams and how they play," said Dyche, when asked if Van Gaal's reference to long balls had surprised him.

"In the Premier League, it's rare to find even a longer pass. They tend to play all short and sharp.

"That's for others to decide how productive that can be. I know what I think is productive football, most of you have seen it last season, and I think we play some fantastic stuff.

"It's productive, but I think it's good to watch, the fans enjoy it and it does get points on the board. It's a tougher challenge this season but that's what I believe in, that's what the players believe in and I think they delivered it very well.

Dyche remains eager to add to his squad before the transfer window shuts on Monday.

After joking that he would like to sign a further 15 new players, the 43-year-old acknowledged the difficulties Burnley face in bringing in fresh faces.

"The market has moved forward; we've got some money for the first time in a long time and yet the market has jumped forward to a level where it's very difficult," he added.

"We've been first in and first out to a number of situations, which were ones we thought we could progress.

"I really like the group you've seen today, I like the way they operate, but we do want strength in depth and people who can challenge to move us even further forward."