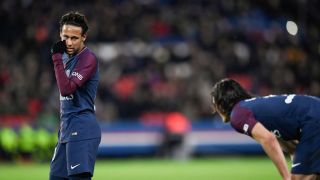 Paris Saint-Germain's penalty taker remains an issue for within the dressing room according to Unai Emery, following the latest controversy involving Neymar and Edinson Cavani.

World-record signing Neymar turned in a dazzling display against Dijon in midweek, hitting a hat-trick as the Ligue 1 leaders established a 7-0 lead in the second half.

Cavani was also on target, bringing him level with Zlatan Ibrahimovic's all-time mark of 156 goals in PSG colours, but Neymar grasped the ball when the Uruguay striker was brought down to win an 83rd-minute penalty.

Neymar dispatched his fourth goal of the game to whistles from the Parc des Princes crowd that continued after full-time.

This weekend sees PSG face Lyon, the opponents when Neymar and Cavani had an on-field spat over a spot-kick back in September, but Emery sees no need to bring public clarity to the issue.

"In the locker room, it is not about individual statistics," he told a pre-match news conference when asked about Neymar denying Cavani his record tilt.

"I don't have to say who the penalty takers are. We talk about it in the locker room, not on the outside.

"[Cavani] is one of the experienced players. All players are important. Each have their own personality and all are very involved in the locker room."

"The best preparation [for Madrid] are these games, training sessions and management of playing time," he added.

"Let's play twice a week until the game in Madrid. We address the needs of the players by aligning each time with the best and most fit. We'll continue to do so."