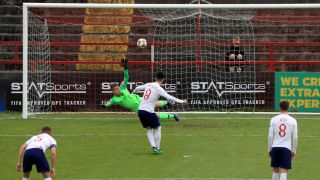 England’s 2019 European Under-17 Championship hopes are on the brink after losing to defending champions Holland 5-2.

The Young Lions have collected just one point from their opening two Group B games and, after France’s 4-2 win over Sweden, are close to elimination.

Steve Cooper’s side face Sweden in their final game on Thursday needing to win and France to lose heavily to Holland.

In Dublin on Monday England led twice in the first half through Manchester City’s Taylor Harwood-Bellis and Arsenal forward Sam Greenwood’s penalty.

But Bryan Brobbey’s brace and goals from Sontje Hansen, Naci Unuvar and Naoufal Bannis wrapped up victory for the Jong Oranje.