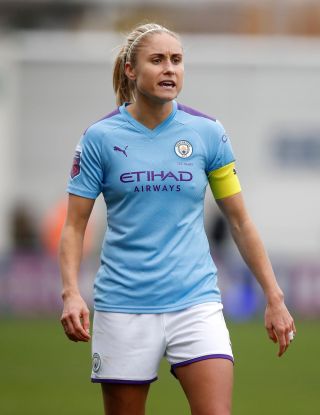 Houghton has extended her tenure at the club by two years, keeping her a part of the squad until the end of the 2021-22 campaign.

The centre-back has captained the Blues to three Continental Cups, two FA Cups and a league title, plus consecutive Women’s Champions League semi-finals.

“My only thought was to have my future here for the next few years and I’m really happy.” 🗣 @stephhoughton2— Manchester City (@ManCity) January 24, 2020

“I’m really delighted,” she told the club’s official website. “I’ve been here for six years and I’ve been made to feel at home – this is my club and I’ve enjoyed so many amazing memories here so far, winning trophies and with the players I’ve played with and manager I’ve worked under.

“I came here with the intention of winning trophies, bettering myself as an individual and a player, playing for a team who plays good football and could be the best in England. I believe this club can go as far as it wants to go.”

Houghton, 31, first joined City in 2014 and has since made 160 appearances in between leading the Lionesses to a World Cup bronze medal in 2015 and gaining an MBE for services to football in 2016.

“I really feel there’s more to come from myself,” she continued. “This is the right club for me to continue to improve and I feel I’m in the best physical shape I’ve ever been in. Every time I go out onto the training pitch, I have more energy and enthusiasm, and I want to learn.

“Even though I’m a little older – and I was when I first came – it’s important to have the drive to be the best. I’ve certainly got that.”

Head of women’s football Gavin Makel recognised Houghton’s pivotal role in the success of the team, adding: “We are thrilled that Steph has committed her future to Manchester City.

“She has been an integral member of not only the team, but the club as a whole since our reformation six years ago and her efforts go well beyond her performances on the pitch.

“Her leadership skills are second to none and she never fails to amaze everybody here at Manchester City with her passion, drive and hunger to improve.”