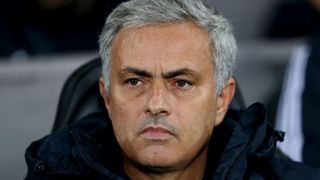 Jose Mourinho took another swipe at Manchester United's supporters in his programme notes ahead of Tuesday's Champions League Group A game against Benfica on Tuesday.

Mourinho was unhappy when the Old Trafford faithful booed his decision to replace Marcus Rashford with Anthony Martial during Saturday's Premier League game against Tottenham.

Martial went on to seal a 1-0 win and Mourinho gestured with his finger to his lips at full-time in apparent admonishment of his critics in the stands.

Afterwards, Mourinho interpreted the crowd reaction to the substitution as a lack of support for striker Romelu Lukaku, whose form he defended at a pre-match news conference for the Benfica match.

However, that did not do the job when it came to the Portuguese getting all of his gripes out of his system.

"To play like that and get three points, I was really happy with [the players] and, obviously, the result," he said, reflecting on the Tottenham win in the matchday magazine.

"Those are the levels of professionalism and commitment that I always want to see in every game we play.

"I hope tonight we can do just as good a job, take another big step towards the knockout stages of the Champions League and I hope you enjoy the game more than some of you did against Tottenham."

United can secure a place in the last 16 of the Champions League against Benfica if they better CSKA Moscow's result against Basel.