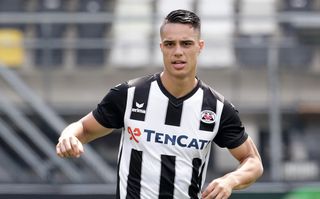 John Stegeman's side had scored just six league goals leading up to Saturday's clash, but they finally hit their stride with a sensational performance.

Jeroen Veldmate got the opening goal with a 10th-minute penalty and Thomas Bruns doubled their lead soon after with a fine long-range finish.

Stipe Perica's red card 29 minutes in made Breda's task even tougher and Wout Weghorst added the third with an easy finish just before the break.

A controlled Joey Pelupessy effort from outside the area in the 64th minute made it 4-0 and, although Mats Seuntjes pulled one back, things only got worse for the visitors.

Iliass Bel Hassani and Jaroslav Navratil added gloss to the scoreline in the final stages, earning Heracles a brilliant first win of the season, although it was not enough to take them off the bottom of the table.

At the other end of the standings, Cambuur joined leaders PSV - and Ajax and PEC Zwolle - on 15 points with a comfortable 4-1 triumph against Dordrecht.

The home side got off to an excellent start as Daniel de Ridder chipped over goalkeeper Filip Kurto in the first minute.

Journeyman forward Bartholomew Ogbeche doubled the lead five minutes later as he capitalised on a mix-up in the Dordrecht defence, and the Nigerian got his second just after the break.

Sander van de Streek netted the fourth a few minutes later and, although Rihairo Meulens stopped Cambuur claiming a clean sheet, his 85th-minute strike was nothing more than a consolation.

Go Ahead Eagles produced a stunning second-half turnaround to claim a 3-2 win at Utrecht, a result which sees them move out of the bottom three.

Gyrano Kerk and Ruud Boymans netted twice in quick succession at the start of the second half as Utrecht looked well on their way to victory.

But the visitors' comeback started in the 54th minute as Deniz Turuc pulled one back and Bart Vriends equalised 16 minutes from the end, before Jeffrey Rijsdijk completed the unlikely turnaround in stoppage time.

The day's other clash saw Willem II come from behind in the last 15 minutes to beat Heerenveen 2-1.