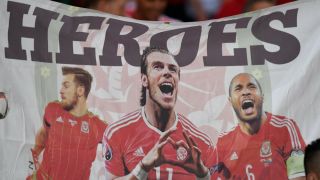 Wednesday saw Portugal win the first Euro 2016 semi-final while build-up continued to the high-profile clash in Marseille between hosts France and world champions Germany. But, as always, there was plenty going on away from the match action, and you can find the best of it in our diary...

We have a certain stereotypical picture of the singing, chanting and howling football fan; beer in hand, slightly pink from sunburn and with a belly hanging over a pair of shorts.

A group of French men and women in their autumn years brandishing songsheets don't really fit in with the scene.

But that was exactly what happened in Lyon's old town when travelling Wales fans were joined by some scene-stealing locals ahead of their last-four showdown against Portugal.

Their take on a traditional French song went down a storm, and their new friends responded in kind with an all singing, all dancing version of Andy Williams' "Can't Take My Eyes Off You".

Each country's national anthem then boomed back and forth.

The city of Marseille has had a lot of bad press during Euro 2016.

It started prior to the first match when England and Russia fans fought running battles around the Old Port area and there have also been flashpoints involving followers of Poland and Hungary, not to mention criticism of the Stade Velodrome pitch.

But on Thursday, France captain Hugo Lloris is hoping the residents of this football-mad area can hit the headlines for the right reasons and inspire his team to victory over Germany in the semi-final.

"Marseille is special," said goalkeeper Lloris. "There is a lot of fervour in the city and I hope this will help us deliver our best against Germany. We hope the crowd will give us that extra percentage point to help us."

We have no doubt at all they will.

Security measures at Euro 2016 mean all members of the media have to go through airport-style metal detectors and x-ray machines upon entering each match venue.

The trays of belongings generally contain what you'd expect - laptops, mobile phones, wallets. But a woman at the Stade de Lyon broke the mould on Wednesday when she brought a skateboard through.

As our man at the stadium stood perplexed, if a touch disappointed by the bog-standard contents of his own bag, off she went - wheeling away towards the semi-final.

A DESIGN FOR LIFE

Welsh band Manic Street Preachers have really bought into their team's run to the semi-finals.

Not only did they provide the team song prior to their departure for France, they have been vocal in their support of Chris Coleman and the team in the media, with bass player and lyricist Nicky Wire even revealing on Wednesday that he has worn the same clothes and sat in the same chair for each game.

They have now taken their fanship to another level, by having their faces put on football stickers in Wales kit!

Don't forget parents, if you tolerate this your children will be next.

We could not let International Kissing Day pass without mention.

In a country where a peck on both cheeks is a customary welcome, France has seen its fair share of tender moments over the past month, not least the Iceland fan who proposed to his girlfriend on kiss-cam prior to the quarter-final defeat to France in Paris.

There will no doubt be more to come but, for now, these two are just mucking around...