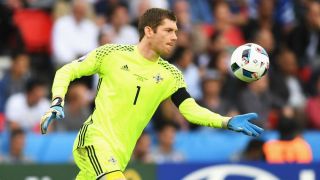 Goalkeeper McGovern's Hamilton Academical contract expired at the end of last season and he had been tipped to join Rangers, but a string of impressive displays in France - most notably against Group C giants Germany - attracted interest from elsewhere.

The 32-year-old now heads to Carrow Road, linking up with former Hamilton manager Alex Neil, as the Canaries look to bounce back from last season's Premier League relegation.

"Having worked with the gaffer before, that was a big pull for me," McGovern told Norwich's official website.

"I had some interest from elsewhere but I'm really looking forward to working with him again now at Norwich. It's nice to join a club where I'll have some familiar faces around me.

"I'm aiming to get into the team but I know I'm up against some top-class goalkeepers. It's going to be intense competition, although it's a challenge I'll relish.

"I want to play but also I want to help the younger players coming through as much as I can. That's something I've looked to do at my previous clubs, and I'll look to lend my experience wherever possible."