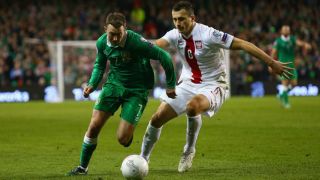 Slawomir Peszko took advantage of a Robbie Brady error to score what looked like being the winner midway through the first half.

But Long came off the bench to score in the first minute of added time and improve Ireland's hopes of automatic qualification.

Martin O'Neill's side - beaten by Scotland in their previous qualifier - remain three points behind Adam Nawalka's men, who return to the top of the group, and two points back on Germany and Scotland.

With so much at stake, the contest was scrappy from the start, and both sides struggled to create clear-cut openings.

The hosts, in particular, were guilty of mistakes all over the pitch, but improved after half-time to ultimately salvage a point.

In an effort to avoid being overawed by the occasion, O'Neill had opted for experience in his selection.

He recalled Shay Given and captain Keane, after the record goalscorer only made the bench for November's defeat to Scotland.

The hosts saw little of the ball in the opening 10 minutes, but created the first opportunity from a quick free-kick, only for Wes Hoolahan to scuff his effort wide.

There was no such profligacy from Peszko when presented with a clear opening in the 26th minute.

Brady was caught in possession deep inside his own half, allowing Maciej Rybus to nip in and steal the ball before the Cologne midfielder took over to drive into the box and rifle a low shot past Given from a tight angle.

That goal unsettled Ireland and they appeared uncomfortable in possession, inhibited by the occasion.

However, they began to get to grips with the game, and their opposition, in the closing stages of the half.

Lukasz Fabianski was beaten six minutes into the second period, when Brady's left-wing cross took a deflection off the head of Pawel Olkowski, only to bounce out off the post.

James McClean came off the bench to inject some energy into the Republic of Ireland attack and almost laid on the equaliser in the 72nd minute.

His left-wing cross was met by Keane at the back post, but Fabianski was able to push the striker's header onto the post.

Frustration boiled over for the hosts in the closing stages and James McCarthy was lucky to escape with only a booking after raising his hand to strike Sebastian Mila in the face, moments after the Poland substitute had come on.

Just when the match appeared to be getting away from Ireland, Hoolahan put the ball back across goal following Brady's deep corner, enabling Long to control and clip over Fabianski from close range.