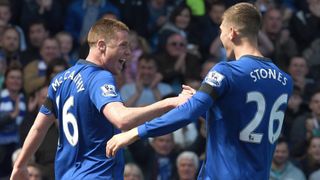 Martinez has come in for criticism from certain quarters of the Goodison faithful during a testing second season on Merseyside, but the Spaniard got his tactics spot on to earn a morale-boosting win on Sunday courtesy of goals from James McCarthy, John Stones and Kevin Mirallas.

Predictably, Everton's fifth-minute opener came via a swift counter, with McCarthy applying a superb finishing touch to a move that he started.

And the hosts' second goal also arrived after a spell of United pressure, with Stones' brilliant near-post header from Leighton Baines' corner giving Martinez a two-goal cushion 35 minutes in.

Van Gaal introduced Radamel Falcao for Marouane Fellaini – who missed United's best chance of the game in a miserable return to Goodison – at the break in an attempt to sharpen his side's cutting edge.

But it made no difference, as an Everton substitute, Mirallas, rounded the scoring off 16 minutes from time to condemn United to a second straight loss after last week's defeat at Stamford Bridge.

United began on the front foot but were caught out by an incisive Everton breakaway early on.

McCarthy began the move by spreading wide to Seamus Coleman, whose cross was only partially cleared by the recalled Daley Blind.

McCarthy then collected the loose ball, skipped beyond weak challenges from Blind and Paddy McNair and calmly slotted low beyond David de Gea.

Fellaini should have marked his first appearance at Goodison as an opposing player with an immediate equaliser, but the Belgian tamely side-footed over the bar with only Tim Howard to beat after nicking possession off Gareth Barry.

Van Gaal's side continued to probe but, for all their territorial dominance, found themselves two down 10 minutes before the break when Stones glanced home his first Everton goal from Baines' inch-perfect delivery.

The pattern of the first half remained in place despite Van Gaal's introduction of Falcao and Angel di Maria, with United continuing to toil in the final third.

And Everton once again punished United on the counter when Mirallas raced onto a Barkley pass that was intended for the offside Lukaku before slotting past De Gea at his near post.

Mirallas was clearly in the mood, and forced De Gea into a fine save to keep the score at three with five minutes remaining.

In a rare positive for Van Gaal, Robin van Persie then came on following a two-month injury lay-off, but the day belonged to Martinez and United's place in the top four - which appeared rubber-stamped after their derby win over Manchester City - remains insecure.