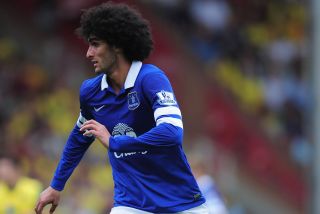 The Liverpool Echo claimed on Monday that the Goodison Park club had turned down a £28 million offer from the English champions for the pair on the eve of the new Premier League season.

United manager David Moyes signed both players while he was in charge at Everton and is reportedly keen to reunite with them at Old Trafford.

Everton boss Roberto Martinez recently revealed that a buy-out clause in Fellaini's contract, which valued the Belgian at £23.5m, had expired.

Moyes has already been frustrated in his attempts to strengthen his squad, with a highly publicised pursuit of Barcelona's Cesc Fabregas proving unsuccessful.

England international Baines is seen by many as a long-term replacement for Patrice Evra at left-back.