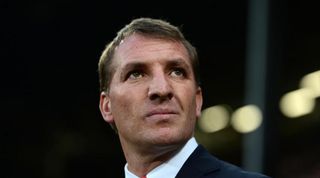 Rodgers spoke after Sunday's scrappy 2-1 Premier League win over Southampton about his desire to bring a genuine goalscorer to the club in the wake of Suarez's departure to Barcelona.

The Uruguay forward – the Premier League's top scorer last term with 31 in 33 games - left Anfield for a reported £75million fee and Rodgers has wasted no time in making several additions to his squad.

Now a poacher is on top of his transfer wishlist and while the search goes on, Rodgers wants Liverpool to improve as a group.

"More goals from everyone – that's the objective," Rodgers told the club's official website.

"Everyone will want to improve. Raheem [Sterling] had 10 goals last year.

"It was a great pass by Jordan [Henderson, who set up Sterling's opener on Sunday]. He picked him out really well with a wonderful ball and he gets himself in the box with a wonderful finish.

"It was a really good finish and that started to open up the game a bit, with a bit more space to work in. But they were dangerous opponents."

Only three sides have scored 100 goals or more in a Premier League season in the last 10 years, with Chelsea, in 2009-10, and City – last term – achieving the feat.