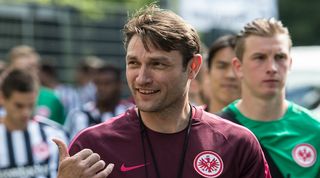 Robert Kovac, who is the assistant manager to his brother Niko at 11th-placed Frankfurt in the Bundesliga, was walking his dog in the Frankfurt Westend when he heard some shouting.

In a story reported by the radio station Hit Radio FFH, a 72-year-old man was withdrawing 40 euros from a machine before he was knocked to the ground by his attacker who tried to make a run for it.

But 43-year-old Kovac saw what had taken place and began his pursuit.

With the 28-year-old thief beginning to leg it, Kovac caught up with him after just a few metres. The former Bayern Munich and Juventus centre-back duly snatched the criminal and handed him over to police.

"You can see that he [Kovac] is trained," said a spokesman for the Frankfurt police afterwards.

A humble Kovac later told reporters: "Civil courage is important but I don't know if I'd always act like that. It depends on the situation."

Now, if only he could help arrest Frankfurt's slide down the Bundesliga table...