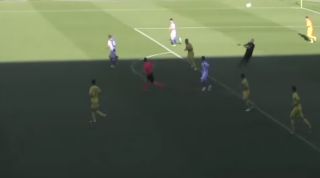 With Real Sociedad II already leading 2-1 thanks to goals from Martin Merquelanz and Oier Calvillo, Navalcarnero's task was made all the more difficult after a calamitous mistake by their goalkeeper Alberto Olmedo.

In the 72nd minute, Olmedo caught a simple floated cross into the box. But with the 30-year-old keen to get his team forward up the pitch to find an equaliser, he drilled his punt straight into the back of Gonzalez, who was jogging away from goal just a few metres away.

The ball hung in the air before slowly bouncing into the back of the net, with the hapless Olmedo unable to dig the ball out.

Instead he ended up lodged in the back of the net, and probably didn't want to come out. The match finished 3-1 to Real Sociedad II.