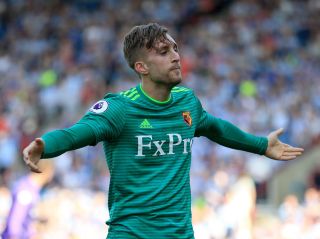 Watford forward Gerard Deulofeu feels this season is shaping up to be the best of his career.

The in-form Spaniard scored his 10th and 11th goals of the season in Saturday’s 2-1 win at Huddersfield to keep the FA Cup finalists on course for their highest-ever Premier League finish.

“Yes, with goals, yes,” Deulofeu said when asked if the current campaign could prove to be a career high point. “But it will be the best season if we win the title (FA Cup) and we finish seventh in the Premier League.”

The Hornets climbed up to seventh on Saturday, but were leapfrogged by Everton following their 4-0 win against Manchester United on Sunday.

Deulofeu’s brace at the John Smith’s Stadium followed hot on the heels of his brilliant Wembley double, which sparked Watford’s fightback in their FA Cup semi-final against Wolves.

Watford struggled to hit their straps against Huddersfield, who continue to give their all despite being relegated in March, but Deulofeu again proved the difference.

“I am (feeling) really good,” the much-travelled former Barcelona and Everton winger said.

“The last game I can’t play against Arsenal, but I am feeling good and playing striker with free movements and a lot of space in the Premier League. That is the reason I feel good and I can score more goals.

“That is the reason I came here – to play regularly and play a lot of games. My career is long because this is my sixth year.

“I am 25 and this is my sixth or seventh year in the first division. Every time I am travelling one way and another. This season I am here playing regularly and that is the reason I am in that form.”

Deulofeu insists the squad is not just content with a trip to Wembley to face Manchester City on May 18 after Javier Gracia’s side maintained their climb up the Premier League table.

“We are so happy to play one final and be fighting for a trophy,” Deulofeu said. “But first of all we want to finish seventh.

“We have tough games and we have to think first about that four or five games. Otherwise we will go to the final in not the best way.”

Watford can move back up to seventh with a home win against Southampton on Tuesday.

“It is going to be tough with a lot of games and we have to recover well,” Deulofeu added. “Maybe this week can decide the season.

“We want to finish up and finish seventh. We have to fight a lot in the next few games. “