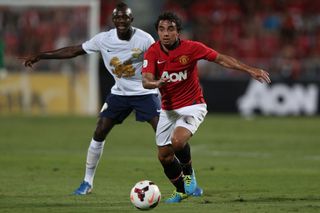 The 23-year-old defender has returned to Old Trafford following a season-long loan at QPR to find himself still on the fringes of the first team, and has made just one appearance so far in 2013-14.

Fabio is pragmatic about the chances of his fortunes improving at United and is prepared to leave the Premier League champions in the pursuit of regular football.

"I think the time has come and maybe in the next window or even next season, I think I might leave," he told ESPN Brasil.

"There are good possibilities. I'm looking for other clubs. There's nothing certain; we'll leave it for later.

"I can return to Brazil, or maybe not, I'm checking with my agent to see what is the best for me."

On a possible return to Fluminense, where he started out, Fabio added: "I have a very big affection for Fluminense.

"I played there for seven years, and certainly if I have to go back to Fluminense I would go with great pride, because I have a special affection for them."

Fabio has made 55 appearances for United since joining the club in July 2008.