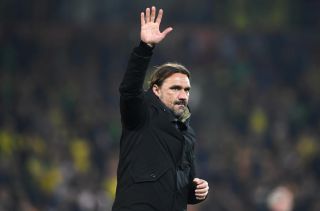 Norwich boss Daniel Farke says it is a privilege to work with his side as they bid to clinch promotion to the Premier League with victory at Stoke on Monday.

The Canaries could be confirmed as Sky Bet Championship title winners if they win and both Sheffield United and Leeds fail to take three points.

Farke was furious after Mario Vrancic’s stoppage-time free-kick had to rescue a 2-2 draw against Sheffield Wednesday on Friday and feels key decisions have gone against his men in their three previous games, which all ended as draws.

“We never know when we have lost a game,” Farke told the club’s official website.

“It felt like all crucial decisions went against us and when you have to handle this situation it’s really difficult not to be killed in the head, but again these lads are outstanding and it’s great to be allowed to work with them.

“I have no words for these lads because their spirit and their will to fight against all the odds is outstanding.

“With this attitude, this mentality, spirit and togetherness you can reach some extraordinary things.”

🗣 "I have no words for these lads because their spirit and their will to fight against all the odds is outstanding." #ncfc— Norwich City FC (@NorwichCityFC) April 20, 2019

The Blades hope to keep their noses in front by taking maximum points at Hull, while Leeds will look to bounce back from their shock home defeat to 10-man Wigan by winning at Brentford.

West Brom can seal their play-off place with a win at Reading or a draw if Bristol City drop points at Sheffield Wednesday.

At the other end of the table – Ipswich and Bolton are already relegated – Rotherham hope to boost their survival hopes by winning at home against Birmingham.

The Millers cannot be relegated on Monday, but if they lose and other results go against them they will be six points adrift and have an inferior goal difference with two games to play.

A 10th straight win for fifth-placed Aston Villa, who play Millwall at home, will edge them closer to a top-six finish.

Middlesbrough sit in the final play-off spot, one point ahead of Bristol City and three better off than Derby, and they cannot afford to slip up at Nottingham Forest.

Derby play at home against QPR, who require at least one more point to guarantee their safety.

While Reading and Millwall face clubs fighting for promotion, relegation rivals Wigan take on Preston at the DW Stadium.

Mid-table Blackburn and Bolton meet in a Lancashire derby at Ewood Park.