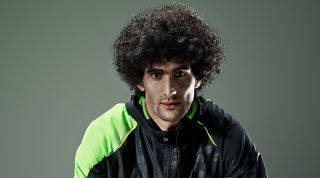 The 25-year-old has made his name at the heart of midfield since breaking through at Standard Liege, and played in an advanced role for Everton in his five-year spell at Goodison Park - scoring 25 goals in 141 league appearances.

Fellaini has since dropped back to his "best" position in defensive midfield after linking back up with former boss David Moyes at Old Trafford. But the Belgian, speaking exclusively in the November 2013 issue of FourFourTwo - out now - believes his attributes could eventually suit a switch to the back four.

"As a young player I played up front, on the wing, in midfield and when I started in the reserves at Standard Liege I played centre-back," he says.

"My best position is defensive midfield. During the last few years with David Moyes I played further forward and I scored some important goals, which is why he kept me there and I liked it because I was young and learning."

Read the full interview with Marouane Fellaini in the November 2013 issue ofFourFourTwo, featuring our must-read chat with Chelsea manager Jose Mourinho. We grill Dutch legend Ronald Koeman, plus read what the world's former most expensive players had to say about their big-money moves. Subscribe, in print or for iPad, now.