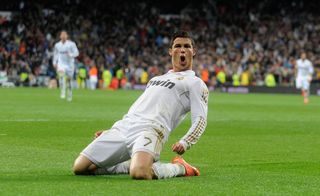 The 28-year-old eventually left the Premier League side for Real Madrid in 2009 for a then world-record fee of £80million.

The move ended Real's long pursuit of the Portuguese star, with Ferguson revealing in his newly published book - Alex Ferguson: My Autobiography - that he waited to sell Ronaldo due to the actions of previous Real president Ramon Calderon.

Calderon irritated Ferguson in his desire to sign Ronaldo, so much so that Manchester United did not sell the attacker until Florentino Perez had been re-instated as Real president.

"Madrid paid £80million in cash for him, and do you know why? It was a way for Florentino Perez, their president, to say to the world, 'We are Real Madrid, we are the biggest of the lot'," Ferguson wrote.

"When the possibility of him leaving edged towards being a probability, I reached a gentleman's agreement with him.

"I went to Carlos's (Queiroz, former Manchester United assistant coach and then-Portugal manager) house in Portugal to find the boy expressing an urge to go to Real Madrid, and told him: 'You can't go this year, not after the way Calderon has approached the issue'.

"I said, 'I know you want to go to Real Madrid. But I'd rather shoot you than sell you to that guy now. If you perform, don't mess us about, and someone comes and offers a world record fee, then we will let you go.'

"I did well to calm him down. I told him that the reason I was refusing to sell him that year was because of Calderon.

"I said, 'If I do that, all my honour's gone, everything's gone for me, and I don't care if you have to sit in the stands. I know it won't come to that, but I just have to tell you I will not let you leave this year'."