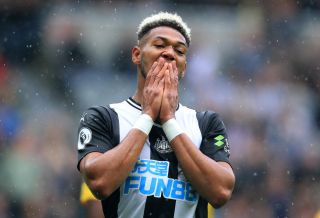 Newcastle’s record signing Joelinton has found himself in the spotlight for the wrong reasons as he struggles to adapt to life in English football.

The Brazilian, a £40million summer capture from Hoffenheim, has managed just a single goal in his first 22 appearances for the club and cut a disconsolate figure as he drew another blank at League One Rochdale in the FA Cup third round on Saturday.

Here, the PA news agency takes a look at other high-profile signings to have taken on the challenge of bringing goals to Newcastle in the Premier League era and how they have fared.

Cole announced himself in style on Tyneside with 22 goals in his first 22 games to help clinch promotion to the Premier League, and there was uproar when he was sold to Manchester United in January 1995 having taken his tally to 69 in less than two years.

Still revered on Gallowgate for the goals he scored during a two-year stint at St James’ Park, Ferdinand was prolific from the off and his controversial departure for Tottenham in July 1997 left the Toon Army collectively scratching their heads once again.

The Magpies paid a then world record £15million to bring Geordie Shearer home and were richly rewarded with a decade of sterling service which saw him eclipse Jackie Milburn’s record tally of 200 goals for the club.

A young Tomasson was thrown in at the deep end by then manager Kenny Dalglish after Shearer had suffered a serious ankle injury in pre-season and found the going tough, but went on to enjoy an impressive career with Feyenoord, AC Milan, Stuttgart and Villarreal as well as winning more than 100 caps for Denmark.

Newcastle thought they had staged a major coup when they lured England striker Owen back to the Premier League – he had hoped to return to former club Liverpool – but two serious injuries severely limited his impact during an ill-fated four-year stay.

Nigeria international Martins was given his chance by Glenn Roeder as the Magpies attempted to find a long-term replacement for the retired Shearer and made a fist of a difficult job before leaving for Wolfsburg after three seasons.

Cisse enjoyed a spectacular introduction to English football as he plundered 13 goals, including an astonishing strike at Chelsea, in his first 14 appearances for the club, although his influence gradually waned.

A fans’ favourite from the start, Serbia international Mitrovic was never able to persuade Steve McClaren’s successor Rafael Benitez that he could do a job for him, but was still sold to Fulham for a significant profit in July 2018.

Benitez was allowed to smash the club’s transfer record to bring Almiron to the Premier League from Major League Soccer but, despite a series of enterprising displays, he did not break his duck until his 27th appearance for the club.