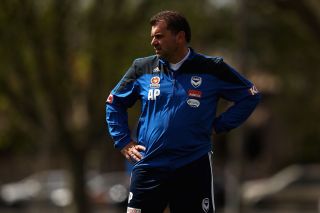 The 48-year-old, along with Central Coast Mariners title-winning coach Graham Arnold and Tony Popovic of Western Sydney Wanderers, is one of three leading candidates to replace the sacked Holger Osieck, according to FFA chairman Frank Lowy.

Speaking ahead of Victory's A-League match away to fierce rivals Adelaide United on Friday, former Young Socceroos coach Postecoglou said he would be proud to take the top job in Australian football.

"If the powers that be find it in their wisdom to have a look at me, or have a chat to me, it would be a great honour," he said.

"If it comes my way, if I'm considered for the position, it would be a great honour, no doubt about it.

"I've had no formal contact. As far as I am aware, I think the club may have had some contact from FFA."

A potential club-country job share has been mooted in some quarters, but Postecoglou does not think it will be possible to remain Victory coach at the same time as leading the Socceroos.

"I tend to throw myself into what I do," he said.

"(They are) both enormous jobs. I don't think you should take shortcuts or half measures with any job."

If one of the domestic candidates is appointed, it would be a cruel blow to their club just weeks into the 2013-14 season.

However, Postecoglou believes, rather than weakening the competition, FFA's preference for a local should be a source of pride for Australian football.

"I'm pleased we feel it's healthy enough and we can look at our A-League," he said.

"I hope the next time the job comes up we've got 10 Aussies coaches who are worthy of being coach of our national team.

"If you look at the way some other countries struggle to get home-grown coaches to coach their national team, it's a healthy thing. I don't think it's a weakening (of the A-League)."

Finally, Postecoglou acknowledged that his assistant, former Victory skipper Kevin Muscat, would be in contention to replace him at the club.

"Kevin would be a number of young coaches around the country who will eventually get an opportunity to coach (in the A-League)," he said.

"Kevin Muscat's been an important part of what we've done here, there's no doubt about it. Anyone who knows the way I work, I put a lot of responsibility on the people around me. The progress we've made in the last 18 months, he's been a massive part of it."