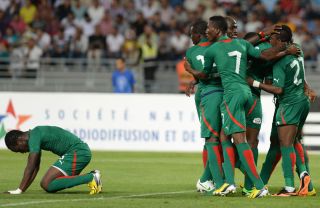 Paul Put's side have dramatically improved in recent years and they will take confidence from their showing at the 2013 Africa Cup of Nations.

In a tournament they had traditionally struggled in, Burkina Faso defeated the likes of Ethiopia, Togo and Ghana as they reached the final before losing to Nigeria 1-0.

Making the final represented significant progress for the nation and they carried that form into their qualifying campaign, winning four of their six Group E qualifiers to top the table.

They started slowly, losing to Congo and Gabon, but a 4-0 win over Niger in March proved the catalyst for a run of form that saw them win four successive matches.

Away wins, both by 1-0 score lines in Niger and Congo, proved crucial and Burkina Faso sealed their progression to the final stage of qualifying with a 1-0 win over Gabon.

That result, coupled with Congo's 2-2 draw in Niger, meant they finished on top of the group by one point, setting up a two-legged play-off with Algeria for a berth at next year's World Cup finals in Brazil.

Rennes forward Jonathan Pitroipa scored twice in the qualifying campaign and the former Hamburg and Freiburg attacker revealed that his team are determined to show their efforts at the Africa Cup of Nations was not a one-off.

"We want to show South Africa was not a fluke," Pitroipa said.

"Everything we did there will become irrelevant if we fail to make Brazil."

Burkina Faso know how important winning the first leg in front of their fans in Ouagadougou is, with a fierce atmosphere sure to confront them in next month's second leg.

Algeria will enter the tie as favourites, given they have reached the World Cup on three previous occasions, including the 2010 event in South Africa.

They did not win a match at that tournament but breezed through qualifying, winning five of their six matches to top Group H by seven points.

Algeria coach Vahid Halilhodzic admitted it was a relief to avoid one of the big nations in a knockout play-off, but said his side cannot take their opponents lightly.

Halilhodzic said: "It is a 50-50 tie. We avoided Cameroon, Egypt and Senegal, but there is no room for cockiness."