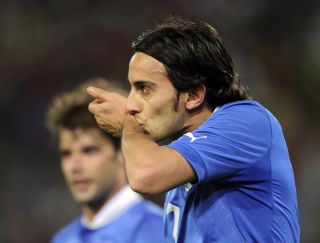 The Fiorentina playmaker struck in injury-time to extend the visitors' unbeaten run in FIFA World Cup qualifiers to 26 matches, depriving Morten Olsen's side of the three points that would have moved them clear in second spot.

As it is, the Danes now face a four-way scrap for a play-off place in Group B after failing to fully capitalise on Bulgaria's shock defeat to Armenia, despite Nicklas Bendtner's double having cancelled out Daniel Pablo Osvaldo's opener.

The Arsenal striker netted in either half and looked to have wrapped up the win for Denmark, but Aquilani provided late drama to stun the home crowd.

Olsen's men face rock-bottom Malta in their final game but will need to rely on results elsewhere to keep their hopes of reaching Brazil alive.

Gianluigi Buffon became Italy's most-capped player, making his 137th appearance to move the goalkeeper one ahead of Fabio Cannavaro.

Southampton's Osvaldo, who was sent off in the reverse fixture, was also handed a start as Cesare Prandelli utilised his squad depth, with a place in next year's finals already secured.

Mario Balotelli scored in the 3-1 win over the Danes last October, but illness deprived the in-form Milan forward of any involvement.

And it was Denmark who started much the brighter, Toulouse winger Braithwaite narrowly failing to make contact with Krohn-Dehli's dangerous delivery inside the first three minutes.

Krohn-Dehli went for goal himself four minutes later as he cut inside before steering a right-footed effort just wide.

But Prandelli's men seized the advantage in the 27th minute, Osvaldo getting the better of Daniel Agger before curling a measured finish past Stephan Maigaard.

And in first-half stoppage time they got their reward as Bendtner rose above Federico Balzaretti to head the impressive Krohn-Delhi's cross past Buffon at his near post.

Olsen made a change at the break, bringing on Emil Larsen for Braithwaite, but just six minutes in they almost went behind again, Alessandro Diamanti wrong-footing Andreas Bjelland only to see his shot hit the side netting.

The post came to Italy's rescue soon after when Eriksen's free-kick deceived Buffon but bounced back into play before being hacked to safety.

It signalled the start of a period of dominance from the home side, who forced two excellent saves from Buffon and struck the bar in a promising five-minute spell midway through the second half.

The pressure finally told in the 79th minute as Bendtner demonstrated his aerial prowess to nod home, only to see his goal eclipsed by Aquilani's scrambled effort with just seconds remaining.