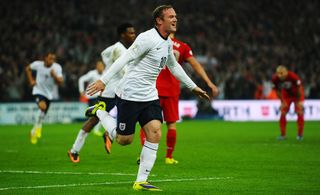 Manchester United striker Rooney opened the scoring with his seventh goal in the six Group H games he has featured in to put England on course for Brazil.

Roy Hodgson's side wasted several chances and Poland goalkeeper Wojciech Szczesny produced a string of saves on a tense evening, but Gerrard sparked a party at Wembley with a second goal two minutes time to secure the three points England needed to qualify and top the group.

The visitors - backed by a huge away following of around 18,000 - had their chances, with Robert Lewandowski in particular having a night to forget.

Chris Smalling was given the nod to replace the suspended right-back Kyle Walker in the England starting line-up, while Michael Carrick was preferred to Frank Lampard in midfield.

There were three changes to the Poland side beaten by Ukraine on Friday night, with Szczesny replacing Artur Boruc in goal, while Piotr Celeban and Waldemar Sobota also came in.

The game started at a frantic pace and after the in-form Andros Townsend's ninth-minute strike was parried away by Szczesny, Danny Welbeck dived desperately to get to the rebound but headed wide.

Poland were dangerous on the counter-attack and Sobota should have done better when he was afforded too much space but fired wide of the near post, then England were given another let-off when Lewandowski raced clear but fired wide with only Joe Hart to beat.

There was no let-up in the action and the tricky Townsend rattled the crossbar with a thumping left-foot strike, then Szczesny denied Daniel Sturridge following up before Welbeck somehow dragged a shot wide from point-blank range when it seemed easier to score.

Welbeck was presented with another chance 11 minutes before half-time when Gerrard played him in with a cushioned pass, but the Manchester United striker failed to get the ball out of his feet and Szczesny came out to avert the danger.

It seemed it would be only a matter of time before the breakthrough came and the opening goal duly arrived five minutes before the break, when Leighton Baines picked out Rooney with a pinpoint delivery and the striker rose unmarked to head home from six yards out.

Poland made a bright start to the second half and Gary Cahill did well to get in the way of a goal-bound shot from Mateusz Klich, on as half-time substitute.

Cahill came close to a second England goal five minutes after the break when the busy Szczesny palmed away his downward header from a Gerrard corner, then Grzegorz Krychowiak almost put the ball into his own net when he stretched to cut out Rooney's cross.

Lewandowski went one-on-one with Hart once again on the hour-mark, but the England keeper raced out and narrowed the angle to thwart the Borussia Dortmund striker.

Rooney almost had a second after 66 minutes only for Szczesny to tip away the England striker's long-range strike that was bound for the far corner and Sturridge was also denied by the Arsenal keeper once again.

But Gerrard eased the tension when he burst into the penalty area and beat Szczesny with a tidy finish.