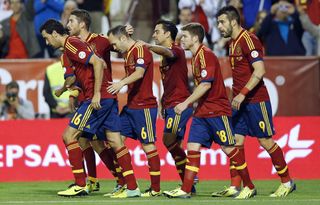 The quartet join Germany, Netherlands, Italy, Belgium and Switzerland as Europe's first nine representatives in Brazil, while the eight teams to contest the play-offs has also been decided.

Croatia, Portugal, Greece and Sweden will be the four seeded teams in Monday's draw, while France, Ukraine, Romania and Iceland will be the non-seeded sides.

Denmark are the side to miss out on November's play-offs after they finished as the 'worst' runner-up, despite winning their final Group B game 6-0 against Malta.

Spain will defend their World Cup title after a 2-0 win over Georgia earned them a spot in the finals. Goals from Manchester City's Alvaro Negredo and Chelsea's Juan Mata proved the difference in Albacete and ensured Vicente del Bosque's side ended their campaign unbeaten.

That result meant Group I rivals France had to settle for a play-off place. Didier Deschamps saw his side end their campaign well as Franck Ribery, Karim Benzema and a Joona Toivio own goal secured their 3-0 over Finland.

Bosnia were the first team to secure their place in Brazil on Tuesday after they beat Lithuania 1-0 in Kaunas.

Vedad Ibisevic struck the crucial goal in the 68th minute to seal a World Cup spot for the first time, with Greece behind them on goal difference at the top of Group G despite their 2-0 win against Liechtenstein.

England secured top spot in Group H with a 2-0 victory over Poland at Wembley to send them to their 14th finals. Wayne Rooney grabbed the opening goal as he rose to convert a Leighton Baines cross, before Steven Gerrard added a second late on.

Russia topped Group F despite being held 1-1 by Azerbaijan, the point enough to take them to Brazil and leave Portugal – who beat Luxembourg 3-0 – in second place.

Germany came from behind to beat Sweden 5-3 in Solna, a result that included a second-half hat-trick from Andreas Schurrle as well as a late injury concern over Mesut Ozil.

The defeat did not harm Sweden's play-off place, with Austria finishing three points behind them in third in Group C after their 3-0 success over Faroe Islands.

In Group D, Louis van Gaal saw his Netherlands side ease past Turkey 2-0 in Istanbul, Arjen Robben opening the scoring before Wesley Sneijder sealed the win early in the second half.

Italy and Belgium were both held to draws in their final matches by Armenia and Wales respectively, while Switzerland ended their campaign with a 1-0 win over Slovenia.

That defeat meant Slovenia missed the chance to jump above Iceland into second place in Group E, so their 1-1 draw with Norway in Oslo was enough to secure their first play-off place and leaves them 180 minutes away from reaching their first major tournament.

Croatia clinched a play-off place in Group A despite falling to a 2-0 defeat against Scotland, while Serbia maintained third place with a 5-1 win over Macedonia.

Romania took advantage of Turkey's defeat to Netherlands to jump into second place in Group D with a 2-0 win over Estonia - Ciprian Marica grabbing both goals.

Hungary – who had been in contention for a play-off spot in Group D  – had to settle for third place after their 2-0 win over Andorra.

Israel's slim hopes of making the play-offs were ended by a 1-1 draw with Northern Ireland, while Azerbaijan's draw with Russia saw them jump into fourth in Group F.

Ukraine made sure of their play-off place behind England with a comprehensive 8-0 win over San Marino, but it would not have been a in doubt due to Montenegro's 5-2 defeat at home to Moldova.

There were also final-day wins for Bulgaria and Republic of Ireland against Czech Republic and Kazakhstan respectively, while Latvia scored a last-minute equaliser to earn a 2-2 draw against Slovakia and there was a goalless draw between Albania and Cyprus.