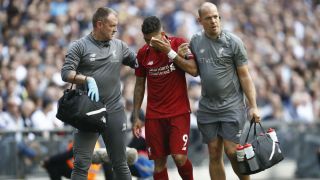 Roberto Firmino is a major doubt for Liverpool's Champions League clash with Paris Saint-Germain after missing training on Monday.

The Brazilian was substituted in the 74th minute of his side's 2-1 win at Tottenham on Saturday after a nasty clash with Jan Vertonghen in which he was caught in the eye.

Firmino was taken to hospital where he underwent tests that confirmed he sustained an abrasion but no lasting damage.

Speaking before training, Jurgen Klopp was positive Firmino could recover to face PSG, but his participation now appears unlikely.

"We all hope there will be a chance tomorrow," he said. "Everybody who saw the picture after the game, we were all shocked.

"It's painful, nobody wants to have that, but he will be fine. We don't know exactly when. We will see how it develops."

Should Firmino fail to pass a fitness test, Klopp made it clear Daniel Sturridge could step in.

"He [Sturridge] will be ready," said Klopp. "If Bobby [Firmino] can't play, and Dominic Solanke can't, we are short of options because [Solanke and Divock Origi] picked up little injuries with the Under-23s against Swansea.

"There's no problem with the first line-up, only with having options."