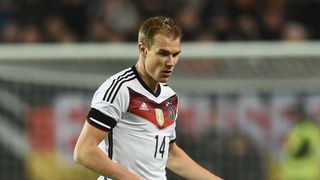 Badstuber is regarded as one of world football's best centre-backs, but his career has been blighted by injury in recent seasons.

The 26-year-old missed the second half of the 2012-13 season and the entire 2013-14 campaign due to cruciate knee ligament problems, a setback that ruled him out of Germany's World Cup victory.

A thigh tear sustained in April once again halted his run in the first team, but he returned in early November and has made five appearances for Bayern this season.

Badstuber is now focused on doing enough to book a place in Joachim Low's plans for this year's Euros in France.

"The European Championship is still far away," he told Bild. "The national team is also an issue again at some point, but not currently.

"All the foundations have been laid for it and I'm ready, but first I want to make my contribution at Bayern again permanently."

Badstuber, who has 31 caps for Germany, is preparing to return to training with Bundesliga champions Bayern, who are currently on a mid-season break.

"Heading back to #Munich. We had a great time in the Alps with time to rest and to set new goals," he posted on Twitter on Sunday.

Bayern, who lead the Bundesliga by eight points, report back on Monday before heading off to Doha for a training camp on Wednesday.