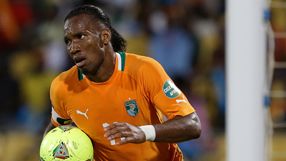 Drogba, 34, brought his team back into their final Group D match with a header that halved Algeria's 2-0 lead. He was back to his old powerful self as Ivory Coast, who had already qualified for the knockout stages, recovered to draw 2-2.

"I am up for it. The first two games [against Togo and Tunisia] were very difficult mentally and physically for me because I have been out of competition for nearly three months now," Drogba told Reuters.

"If you are out for that long it is difficult to get back into shape, but I am working so hard in training and I was more involved tonight, and it pays off. I am really happy."

Drogba said he could not comment on a dispute brewing between China's Shanghai Shenhua and his transfer this week to Turkish club Galatasaray. Earlier on Wednesday, the Chinese side said his transfer violated the terms of his contract.

"The lawyers have told me I can't talk about that," he said. "I can't, and you know lawyers. But I can talk about the African Cup.

"I am just thinking about this cup, nothing else. We played good tonight, not very well, but good enough and I felt much better. The longer the game went on, the better I was feeling and that is a very good sign."

Drogba started in the 2-1 win over Togo, but was substituted and then came on as a substitute against Tunisia on Saturday.

He played for the full 90 minutes on Wednesday and said the result was important because Algeria, despite being eliminated were still a good side, ranked second in the continent, and his team mates had to show some real character to draw.

"Yes we battled as a team and now we are looking ahead to Nigeria. It is too early to talk of titles, but you can still dream.".

Drogba will come up against one of his close friends and former Chelsea team-mate John Obi Mikel when the two sides come face to face in Rustenburg on Sunday.

"It's going to be hard and tough. Everybody knows how good he is and what he did with Chelsea in the Champions League final. It was great. He was one of our best players and now I am playing against him.

"We are going to laugh before the game, be tough with each other during the game and then laugh again after because we are good friends. He is my brother."

Drogba enjoyed a Champions League final to remember this year, scoring the equalising goal for Chelsea that took the match against Bayern Munich to a penalty shootout. He then scored the decisive penalty that won the final for his old team.

It was his last match for Chelsea before his move to China, but whether he has played his final match there, just seven months after moving east, is still undecided.

Drogba agreed to an 18-month contract with Galatasaray on Monday in a deal which includes a six million euros transfer fee, a salary of 15,000 euros per match and a 4 million euros signing on fee.

However, Shanghai Shenhua said the agreement had violated the club's contact with Drogba and they were ready to raise the issue with the world football go