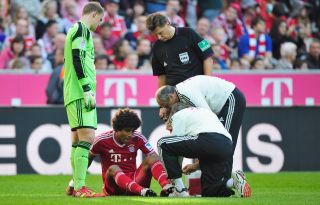 The Brazilian defender suffered the knock during the 4-1 victory over Mainz in the Bundesliga on Saturday, and revealed on his Twitter account that he is set for 10 days on the sidelines.

Bayern found themselves 1-0 behind after Shawn Parker had given the visitors a surprise lead, but second-half goals from Arjen Robben, Mario Mandzukic and a Thomas Muller double kept them top of the table.

However, Dante was substituted in the 43rd minute at the Allianz Arena following a clash with Zdenek Pospech.

He limped off to be replaced by David Alaba, and Dante used the social networking site to reveal the extent of his injury.

"I received a stomp and ended up cutting the foot," he revealed. "I had to get six stitches.

"I think that in ten days I'm back and it was nothing serious."

The injury could also force the 30-year-old out of their league match against Hertha Berlin next weekend.