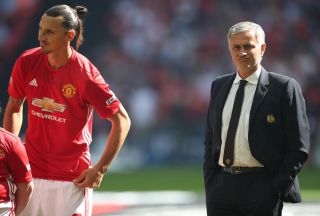 Zlatan Ibrahimovic could be joining his old boss Jose Mourinho at Tottenham, the Daily Telegraph reports. Mourinho took the Swede to Manchester United when he was in charge at Old Trafford and is now said to be considering scuppering AC Milan’s attempts to sign the 38-year-old, who is available on a free transfer after ending his two-year spell at LA Galaxy.

Lucas Torreira is considering a January exit from Arsenal, the Daily Mirror reports. The Uruguayan midfielder has been linked to Napoli and AC Milan.

Interest in Nemanja Matic has reportedly increased, with Atletico Madrid and AC Milan said to be in the hunt for the midfielder, according to ESPN. The 31-year-old was one of the first players linked to Tottenham after Jose Mourinho was named as the club’s new manager this week.

Gerard Pique has disappointed several leading clubs around Europe by confirming he will retire at Barcelona. The 32-year-old defender says he will end his playing days at Barca in 2022.

Pochettino’s son could end up playing for Spurs under Jose Mourinhohttps://t.co/MQGylY0vYUpic.twitter.com/51hN3cI6y7— The Sun Football ⚽ (@TheSunFootball) November 22, 2019

Nicolas Gaitan: The 31-year-old Chicago Fire and Argentina winger is a target for Aston Villa, Sheffield United and West Ham, according to the Guardian.

Matty Longstaff: Newcastle are “quietly confident” of agreeing a new deal for their young midfielder, according to the Chronicle.