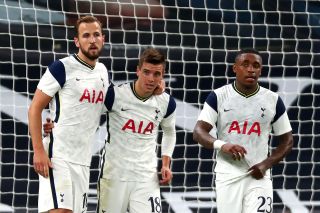 With most Premier League clubs having played as many cup games as league ones so far this season, there have been ample chances for fringe players to prove their worth.

We’ve cast our eye over those who have yet to make a Premier League start in 2020-21 but may have played their way into their manager’s plans for the rest of the campaign.

Steven Bergwijn was one of Jose Mourinho’s first signings as Spurs manager in January and made a perfect start with a goal on his Premier League debut before an ankle injury sidelined him.

The Dutch winger has been exclusively used as a substitute in the top flight this season, resulting in three successive price drops to £7.2m and ownership of just 0.6%.

However he has started all four cup matches and his two assists against Maccabi Haifa in midweek – coupled with an injury to Son Heung-min – have surely moved his name higher up the team sheet.

Sebastien Haller was a popular choice among FPL managers early last season with three goals in his first three Premier League games for West Ham, but the club’s poor performances and the re-emergence of Michail Antonio limited his attacking returns.

However four strikes in his three EFL Cup appearances this term – compared to just one league goal for Antonio so far – suggests David Moyes will be giving the club’s record signing another chance to lead the line.

The Hammers’ tricky fixtures before Gameweek 8 means that he’s probably best kept on the watch-list for now.

Budget options for the bench

One of FPL’s holy grails is a £4m defender who gets onto the pitch, serving as a reliable back-up and enabling funds to be invested elsewhere.

The EFL Cup has highlighted two candidates in this price bracket: Brighton’s Bernardo and Ben Johnson of West Ham.

Both have started all three of their clubs’ cup games and have been named on the bench twice in the league, so are relatively low risk options if you need to free up some cash.

Seagulls waiting in the wings

Brighton ultimately paid the price for heavily rotating their squad in the EFL Cup when they were dumped out by Manchester United’s second string, but it gave a few of their out-of-favour midfielders a chance to shine.

Alexis Mac Allister and Alireza Jahanbakhsh each found the net in both of the Seagulls’ first two cup ties and could benefit from Graham Potter’s fondness for tinkering as the season unfolds.