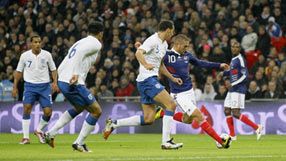 Karim Benzema and Mathieu Valbuena put the visitors 2-0 up before Peter Crouch volleyed a goal back in the 86th minute, seconds after coming on as a substitute.

That goal gave the scoreline an air of respectability that flattered an experimental England side, who only began to find their feet in the last 15 minutes after France coach Laurent Blanc made a series of substitutions.

France had done enough by then to inflict a first home defeat in Fabio Capello's 16th match at Wembley since he became England manager nearly three years ago.

The margin could have been even more emphatic but for Samir Nasri's late effort hitting the outside of goalkeeper Ben Foster's post.

France's victory was fully deserved after an outstanding first-half display of passing and movement which reduced England to virtual bystanders.

The home fans showed what they thought of their team's dire opening 45 minutes by jeering them off at the the break.

Both France, eliminated in the group stages, and England, who went out in the second round, had World Cups to forget, but have shown signs of improvement in their Euro 2012 qualifiers.

This match was the last to experiment with new players before the qualifiers resume, and although Capello gave debuts to strikers Andy Carroll and Jay Bothroyd and midfielder Jordan Henderson, none showed the guile or composure France possessed.

"During friendly game you have to put new young players in because it is very important for the future, but you have to know the squad I selected are the best players available at the moment," Capello said.

"We have found a really good player like Carroll, this is important.

"France played very vell in the first half, we played without confidence, with fear, we played the back and not foward and tried to play the long ball up to Carroll, it was not the style we prefer to play."

Blanc said the result was not the most important thing.

"We had a strategy in place which we played out on the pitch and this is a major satisfaction," he said.

"We worked out how we could put them under pressure from the outset and we reinforced that excellent play by turning it into goals."

Samir Nasri and Yoann Gourcuff ran the midfield with Benzema and Florent Malouda weaving patterns around the static English defenders up front.

France were hardly troubled even when England did have the ball because the home side's passing was woeful with Steven Gerrard guilty of several loose efforts.