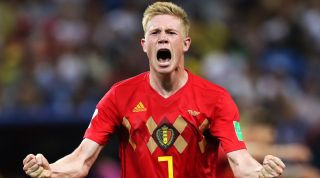 For a dominant midfielder aiming to make their mark in the latter stages of an international tournament, Zinedine Zidane indisputably remains the benchmark in the modern era.

France are two wins away from emulating their celebrated class of 1998, who prevailed 3-0 in the World Cup final against Brazil on home soil thanks largely to a brace of first-half headers from Zidane. The Juventus and Real Madrid great was only just getting started.

At Euro 2000, he strode regally across a quarter-final against Spain – dispatching a precision free-kick to kick-off a 2-1 win. It was the era of golden goal extra time and Zidane displayed nerves of steel to down Portugal from the penalty spot in the semi-final. David Trezeguet brought a similarly abrupt conclusion versus Italy in the final to make it back-to-back titles for Les Blues.

By the time the 2006 World Cup rolled around, Zidane had announced the tournament would be his last. His headbutt on Marco Materazzi in the final remains the indelible memory before Italy's success in a penalty shootout, but the 34-year-old's form up until that point was untouchably majestic.

A shimmy inside Carles Puyol and an arrowed finish completed a 3-1 last-16 win over Spain and another Zidane penalty meant more semi-final woe for Portugal.

In between those triumphs, there was a celebrated masterclass against Brazil – all improbable audacity and razor-sharp effectiveness. The simple and the sublime, never better demonstrated by the glided free-kick to present Thierry Henry with a routine winner.

If anyone representing France or Belgium can approach those standards in St Petersburg on Tuesday, World Cup glory will be significantly closer for their nation. Two men, in particular, will have studied Zidane's footprints.

"Maybe we are talking about Paul Pogba a bit too much, but if he can keep up his current development he can become one of the best players ever," Zidane told L'Equipe in 2014.

The caveat remains telling. It is hard to make a case for Pogba's development remaining on the upward trajectory it hit during those years of Scudetto-hoarding at Juventus.

Euro 2016 presented the opportunity for the parallels to become irresistible but Pogba and France fell short. Portugal exorcised their years of Zidane-inflicted misery with a shock final win at the Stade de France, the scene of Les Bleus' finest hour 18 years earlier.

Pogba was ineffective on the night and Didier Deschamps' struggles to fully harness the plentiful gifts of his midfield powerhouse echo at club level.

The world's most expensive player when he returned to Manchester United in 2016, Pogba's performances at Old Trafford create deep polarization.

Almost without exception, the best United displays of Jose Mourinho's tenure have had Pogba's prints all over them, yet relations with the Portuguese were forebodingly strained last season as the 25-year-old was dropped for several matches.

Zidane would never have suffered such a fate in his prime years but the association and thirst for succession remain. Former United captain Rio Ferdinand spoke of Pogba emulating his hero and compatriot before Russia 2018.

In a France side that still feels tantalisingly shy of the sum of its parts under Deschamps, Kylian Mbappe and Antoine Griezmann are grabbing the headlines but Pogba was a picture of brutal efficiency in the quarter-final win over Uruguay – winning 14 duels during the 90 minutes.

Mourinho probably nodded on in rueful approval. Pogba may be building towards something special. However, there is a man set to line up in Belgium red a step ahead in that regard.

As Brazil's World Cup dream died in Kazan, the display produced by one of their tormentors might have persuaded Selecao fans it was 2006 all over again.

Kevin De Bruyne's first-half strike of power and precision eventually proved the difference between the sides but throughout the contest, there was something of Zidane's gleeful romp in Frankfurt 12 years earlier running through the Manchester City man's display.

De Bruyne's bristling intensity means first impressions do not immediately recall Zidane's languid dominance of the field. But his mastery of the open spaces, both as he tirelessly devours the turf or threads a wonderful array of destructive passes, allayed with deft ingenuity at close quarters make him the nearest approximation of Zizou in football today.

There is even a short, flaring temper in evidence occasionally and, thus far, it has tended to yield more productive results than headbutting an opponent in the chest.

De Bruyne shaking off an ugly challenge from Dele Alli to tear at a backpedalling Tottenham before ramming home a vicious shot off Hugo Lloris's arm last December was a fine example of channelled fury and the 27-year-old's innate feel for the decisive moments in big matches.

"Kevin is one of the best players I've ever seen in my life in terms of how he can make absolutely [everything happen]," said Pep Guardiola last year, a man who wearily chased Zidane's shadow during that Euro 2000 encounter between France and Spain.

The greats generally grasp such moments and there lies the challenge for Pogba and De Bruyne at Krestovsky Stadium.