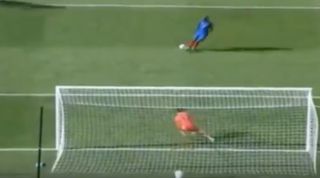 Harit, who has impressed this season for Nantes, surged into the box in the sixth minute of France's Group E tie against Vietnam in the U20 World Cup.

The young midfielder went down after slight of contact from Vietnam full-back Tran Dinh Trong, who was subsequently booked for his troubles.

So up stepped PSG's 19-year-old forward Jean-Kevin Augustin, who was aiming to net his second goal of the competition having already scored in France's opening 3-0 win over Honduras.

However, Augustin decided to give his shot a touch of swagger and went for the Panenka, only to watch his lofted effort come off the crossbar before being batted away by goalkeeper Bui Tien Dung.

He did respond by scoring two goals in the first half, though, so we can't be too hard on the lad.