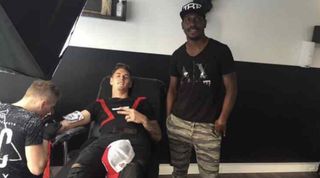 Varela was instructed not to get the tattoo by Eintracht Frankfurt's club doctor ahead of the club's DFB-Pokal showdown against Borussia Dortmund on Saturday, but the 24-year-old decided to get it anyway.

The Uruguay international's bold decision has meant his time at Frankfurt is up: Eintracht sporting director Fredi Bobic has confirmed that Varela, who made 10 appearances for the club in 2016/17, will now return to Manchester United early as a result of his disobedience.

"Guillermo’s path at Eintracht ends here," Bobic said. "The club can’t put up with a player acting against the coach’s and doctors’ instructions.

"We were considering extending his loan, but that’s naturally no longer an issue. Guillermo will be suspended with immediate effect."

According to Kicker, the tattoo on Varela's right forearm hasn't even been completed yet, and he has been told that he will need some more sessions before it can be finished.

That's once it's healed, of course.