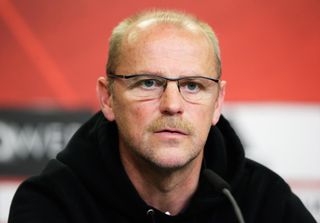 Frankfurt finished the season 13th in the Bundesliga under Veh, who has since moved to Stuttgart after three years at the Commerzbank-Arena.

It will be Schaaf's first coaching role since ending his long association with Werder Bremen, having won the Bundesliga crown and three DFB-Pokal titles with the club.

Schaaf left Werder in 2013 by mutual consent after the club finished 14th.

The 53-year-old's return to the game was announced on Wednesday with the news that he had signed a contract until June 2016 with Frankfurt.

He will be charged with reviving their fortunes after a disappointing campaign that saw them struggle to replicate their sixth-place finish in 2013.

Schaaf was selected ahead of former Chelsea boss Roberto Di Matteo who was thought to be favourite for the role after Veh confirmed his departure.