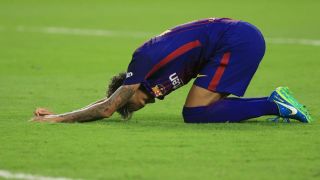 The Ligue de Football Professionnel (LFP) says it "does not understand" the decision by LaLiga to hold up Neymar's proposed transfer to Paris Saint-Germain by rejecting an attempt to pay his release clause.

LaLiga issued a statement on Thursday stating that they had refused to accept a payment of €222million made by a legal team acting on Neymar's behalf that would have released him from his Barcelona contract.

The LFP, the organisation responsible for the major professional leagues in France, has now called on the Spanish body to "abide by the rules of FIFA and its responsibilities" and has offered full support to PSG in their attempts to finalise the transfer.

A statement issued on Thursday read: "The LFP is surprised and does not understand LaLiga's refusal simply to accept the payment of the release clause of the player Neymar.

"The LFP asks LaLiga to abide by the rules of FIFA and its responsibilities.

"The LFP supports Paris Saint-Germain and wishes Neymar to join the Ligue 1 championship.

"The LFP's legal services are in support and at the disposal of Paris Saint-Germain, so that the contract of Neymar can be approved as soon as possible."

LaLiga president Javier Tebas warned this week that they would block PSG's attempts to sign Neymar for the full €222m fee and would take a complaint to UEFA's Financial Fair Play regulators if necessary.

"We will not accept that money from a club like PSG that, without belonging to LaLiga, want to benefit from the rights of our organisation," he told AS.

"If UEFA don't react, we will present our case immediately. We haven't done it yet because we thought that UEFA were going to take measures to ensure that Financial Fair Play is respected, and this 'financial doping' is avoided."

LaLiga are believed not to have the authority to prevent Neymar's transfer if the buy-out clause is met but it is reported that the player could appeal to FIFA to grant a provisional transfer in order to allow him to make his debut for PSG against Amiens on Saturday.

Barca confirmed on Wednesday that Neymar has been excused from first-team training duties after he told the club he wanted to leave.

PSG have not commented on the potential world-record deal but it is reported that the 25-year-old had been due in the French capital on Friday to finalise the move, having completed a medical in Porto.