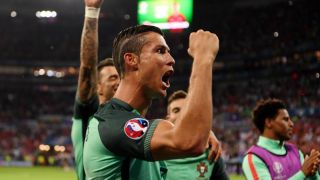 Joe Ledley described one of Cristiano Ronaldo's efforts in the Euro 2016 semi-finals as "useless", with the Wales midfielder claiming the Portugal captain "did not really do anything in the game" apart from score.

Ronaldo equalled Michel Platini's record of nine goals at European Championships with his towering 50th-minute header as Portugal accounted for Wales 2-0 in Lyon on Wednesday.

Portugal's all-time leading scorer and most-capped player also had a hand in Nani's goal three minutes later, with his scuffed shot steered home as Fernando Santos' men set up a showdown with hosts France on Sunday.

But Ledley was not convinced by Ronaldo's performance at the Parc Olympique Lyonnais, preferring to talk up the Portuguese's Real Madrid team-mate Gareth Bale.

"He's one of those players who frustrates you," Ledley said.

"He's never in the game compared to Gareth [Bale]. He's always in the game, always on the ball, always wanting it, always dribbling and always trying to do something.

"They were two crappy goals. Ronaldo's shot was useless. Normally he hits them from there but he scuffed the cross for a tap-in.

"With the header, the guy can leap, but apart from that he didn't really do anything in the game."

Ledley added: "You can't disagree with his ability. He's a fantastic player, one of the best in the world.

"But we just had one of those days where things he did came off. He's now in the final and you wish him well."