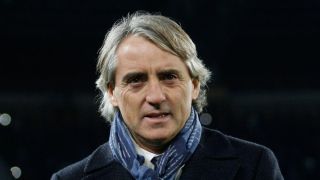 A frustrated Roberto Mancini is planning to enter the transfer market to buy a striker after seeing Inter held 1-1 at home by 10-man Carpi on Sunday.

Rodrigo Palacio's first Serie A goal of the season put Inter ahead by the break and a late red card for Lorenzo Pasciuti appeared to end Carpi's hopes at San Siro.

However, 18th-placed Carpi rescued a point in injury time thanks to a clinical finish from substitute Kevin Lasagna.

And head coach Mancini - a striker himself during his playing days - may delve into the market to add to his forward options, with his team now three games without a win in Serie A.

"If we cannot score more than one goal we will find it hard," he told Sky Sport Italia. "We must work harder.

"A team like Inter must score more than one goal and probably we will have to go into the market to buy another striker.

"We also have to realise that 1-0 is not a solid result, the opposition can always score, so we need determination to finish them off.

"We are throwing away everything we've done in the first 18 games.

"We had seven scoring opportunities. Then in the 92nd minute we fell asleep. It's not normal that we give away so many goals and chances."